The Burgh Council published another very useful document, a copy of which has surfaced alongside the final minute of its last meeting in 1975, which dates back we think to between 1959 and not later than 1965. It was a complete list of their employees at the final count. Burgh Employees is an interesting document for several reasons. It records the names of the officials and employees who kept the burgh going. Many of these employees had given many years of service and their families are still playing a part in town life today. There was a strong emphasis on the management of public amenity assets, with the biggest cost going into waste management, or cleansing as it was known then. Winterfield had a total of 5 employees, but in those days the duties extended to managing the whole parkland and amenity, including the tennis courts and promenade.

Not only are the individuals named, the record also shows the scope of their duties and the salaries they were paid. They may appear, by modern standards to be quite low, but there were some benefits such as free housing. The burgh gardener was William Low, with wide responsibilities including parks, open spaces, rights of way and classified roads. He was paid a mere £8 10s per week (10 shillings = 50p), but received a free house. A modern gardener would expect more than that for an hour’s work. The Pondmaster, an E. Bradbury, also collected advertisements for the Burgh Guide, and was paid a weekly wage of £7  8s 3d and £9 in the summer season. He sadly died in a motorcar accident in 1965. Only William Nelson was paid more, responsible for plumbing, handywork and lighting in the Burgh. The cemetery attendant could also earn more, through weekend bonuses. The Assistant Harbourmaster by contrast received only £2 per week, but would receive 10% on dues collected. The worst paid were women, for doing the same job as their male counterparts, sometimes at 65% of the male rate.

A large staff of 26 was employed, which was boosted in the summer by a further 14 seasonal employees, at the time representing 30% of the wage bill, excluding casual workers, who may have been employed for tasks such as scythe work. 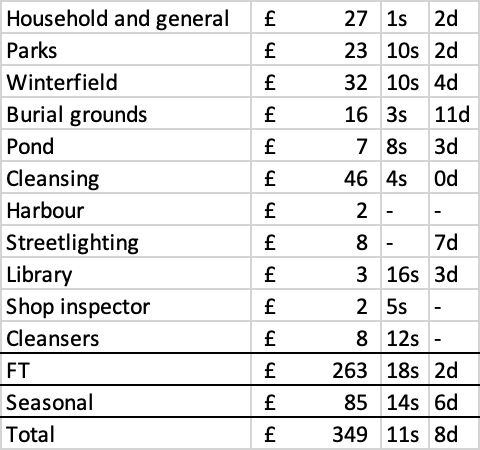 [Ed. If you interested in measuring worth over time, there is useful calculator here, which suggests that the labour worth of £8 10s value in 1965 is equivalent to around £300 in today’s money. The BoE have a similar but less sophisticated online calculator, handy to work how much a great great grandfather’s will was worth in 18XX. ONS is an invaluable source for longitudinal data sets such as the: New Earnings Survey (NES) timeseries of Gross Weekly earnings from 1938 to 2017 . Historic Hansard is also an interesting source, with PMQs on the subject of wages and much much more.]