A ceremony to mark 100 years from the dedication of the Dunbar and Parish War Memorial is being held on Saturday 3rd July at 11am.

The ceremony will be led by Councillor John McMillan, Provost of East Lothian. Roderick Urquhart, Lord Lieutenant of East Lothian, is attending on behalf of HM The Queen, and Mary Duncan, Honorary Canadian Consul for Scotland, is representing the Canadian Government. All three will be making brief speeches. As part of the ceremony, three new names of WWI servicemen (two of whom died in Canadian uniforms) recently added to the Memorial will be dedicated. Their citations will be read aloud by senior students from Dunbar Grammar School. Local clergy will deliver a bible reading and prayers.

The Royal British Legion is providing a piper, banner party and event stewards; the Yeomanry a trumpet major.

An image of the Remembrance Day service at Memorial in the1930s is shown below. 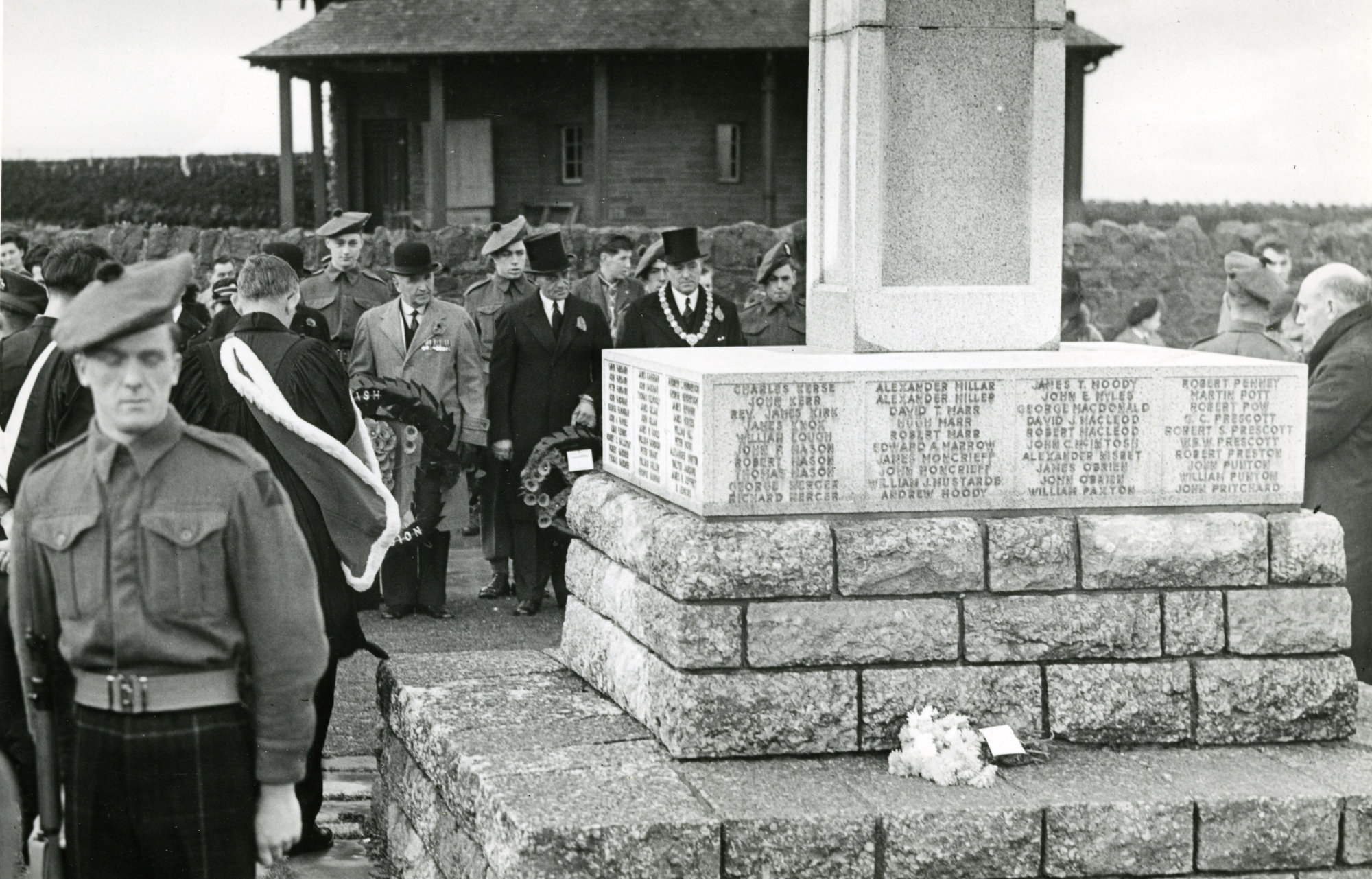 A Century of Remembrance:

On 3rd July 1921, “in the presence of several thousands of spectators” (“Haddingtonshire Courier”) the Dunbar Burgh and Parish War Memorial was unveiled and dedicated. Hymns were sung, prayers offered, speeches made, and tears shed, not only for the 135 “fallen” listed on the Memorial, but also for many others who had returned from the First World War with physical and psychological injuries that would blight the rest of their lives. It was to provide a focus for the remembrance of the sacrifice, pain and loss caused by war that the Memorial, a roll of honour in stone, was commissioned, a purpose it continues to serve.
Erected near the entrance to the town’s West Promenade, it was still at that location when two granite plaques recording 64 dead from the Second World War were attached to its plinth, and dedicated at an “impressive ceremony” on 2nd June 1949. Later, 1 name from the Malayan Emergency was added. In 1989, when threatened by coastal erosion, the Memorial was moved to its present location.
Situated on a clifftop overlooking the North Sea, the Memorial inevitably suffers from the effects of the weather. Concerns over the loss of legibility of the names, and at its general condition, led to the establishment of a project for its preservation and enhancement. This was overseen by a committee drawn from Dunbar Community Council, the Royal British Legion, and Dunbar & District History Society.
Funding raised from external sources enabled conservation work to be carried out and the Memorial’s setting to be upgraded. Also, 1 Second World War name was added. This was all accomplished in time for the Remembrance Service on 11th November 2018 marking the centenary of the First World War armistice.
Subsequently, research was undertaken into individuals with strong local connections who had died in the World Wars but were not recorded on the Memorial. In all, 16 “missing heroes” were identified, 11 from the First World War and 5 from the Second. To accommodate such names, a further granite plaque was attached to the plinth. At a dedication ceremony on 28th October 2019, citations were read out by students from Dunbar Grammar School, two of whom were great granddaughters of men from the Second World War whose names were being added.
On 3rd July 2021, at a ceremony to mark the Memorial’s centenary, 3 further names are to be dedicated, all from the First World War. This brings to 220 the number of individuals honoured in perpetuity by the people of Dunbar and area for sacrificing their lives in defence of the rights and liberties we enjoy today as citizens of a free and democratic country.
WE WILL REMEMBER THEM.